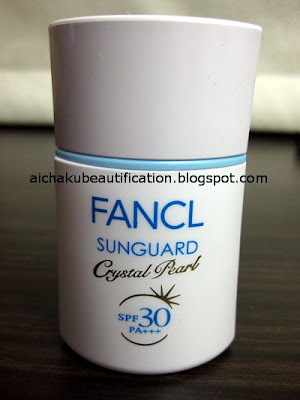 This is the sunblock I use for my face, Fancl Sun Guard 30. I only just realised it's different from the standard one from Fancl. It's a "Crystal Pearl" version. Initially I thought it was simply a different packaging. Because it's a very small bottle I only used it for my face, but it can also be used for the body. I went digging in my cupboard and realised to my dismay, that I only bought ONE bottle of this! It came with the special whitening/suncare set I bought in Japan. As noted in my previous post, it's a good sunblock. My face remained fair after going into the sun, even though I didn't reapply the sunblock. The same cannot be said for sunblock I used for my arms. My arms became darker during the short walk to the bus stop or car, even though the sunblocks were PA+++ or UVA+UVB protected. The body sunblock had to be reapplied every 2-3 hours to work (I tried it the past couple of days, it worked to prevent my arms from darkening) so it's very troublesome. Now I am feeling even worse, because I realised I also forgot to buy DHC's sunblock! I hope that the 2 small tubes of Orbis sunblock I bought are good. Otherwise, I'm going to be very sad. © Copyright. All rights reserved.
Posted by aichaku-愛着 at 22:18

Email ThisBlogThis!Share to TwitterShare to FacebookShare to Pinterest
Labels: review

awww~~
seems like a nice product! is it oily??

:) glad that the product works so well for you and manage to snug some goodies. I always hated myself for not buying stuff till I'm back in Sg.

This looks really interesting. How does this "Crystal Pearl" version differ from the standard?

interesting. is it oily or sticky?

Sounds like fantastic product...does it really give you a pearly glow?

My suitcast is NEVER big enough for all the stuff I want to buy, lol!